As the first sub-Saharan African country to gain political independence on March 6, 1957, Ghana quickly became the toast of world leaders from Washington to Moscow. Led by the charismatic Osagyefo Dr. Kwame Nkrumah, Ghana was poised to bring economic paradise to her citizens. After almost 60 years of seeking the economic kingdom, how has Ghana fared? Reflecting on Ghana’s economic sojourn, well-meaning statisticians at Wave-2 Analytics did a quick review of some of the country’s major growth indicators (provided by World Bank) relative to Malaysia and Guinea (who also got their independence around the same era) at their quarterly breakfast meeting in Columbus, Ohio.

Figure 1: The population of Ghana now and then 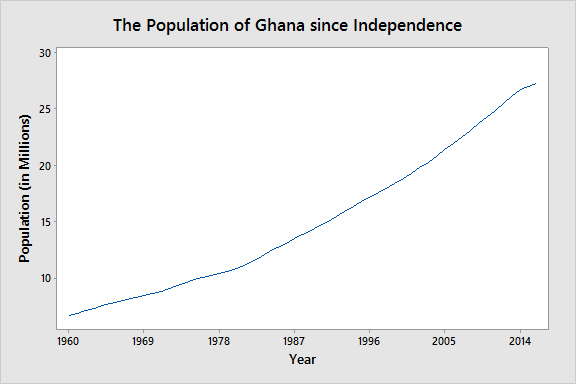 As shown in Figure 1, there were about 6.5 to 7.0 million people in Ghana around the early independence years and the most recent census in 2010 reported the total population in Ghana to be 24.7 million, and it’s projected to hit 27.3 million by the end of 2016. This represents over 320% population growth over the past 59 years.

In basic terms, the GDP measures the national income and/or output for a given country’s economy at a specified period of time. It is one of the most popular measures of a country’s economic performance. The GDP of Ghana increased from 1.2 Billion USD in 1960 to 48.6 Billion USD in 2013, and decreased to 38.6 Billion USD in 2014. The annual GDP growth rate typically shows an overall view of a country’s economic performance year over year. A more standardized measure is the GDP per capita which is derived by adjusting the GDP by inflation rate and dividing the inflation-adjusted GDP by the total population. From one point of view, this can be seen as the share of national income generated by one person. From another perspective, it can be used as a measure of the average living standard of a people in a country. It is particularly useful when comparing one country to another. Due to lack of historical data, we looked at this measure for Ghana from 1990 to date. 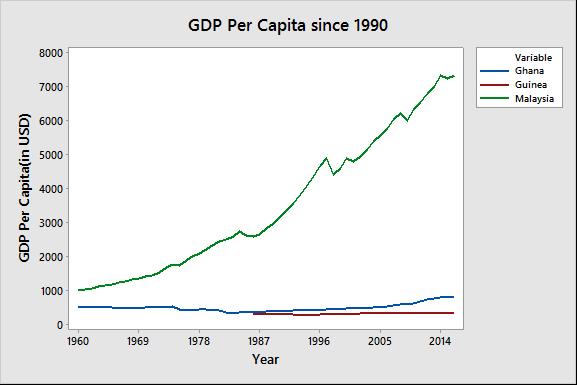 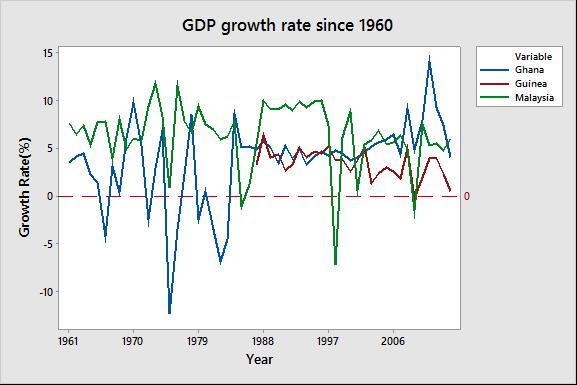 As shown by the figure 2, Ghana’s GDP per capita saw general upward movement from 464.8 USD in 1960 to 755 USD in 2014 and is projected to hit 788 USD in the first quarter of 2016. This represents about 64% increase from 1960 levels. A closer look at the trend however shows that the  GDP per capita decreased from 1969, reaching the lowest in 1983 but consistently increase from 1983 till today. As confirmed by figure 3, the annual GDP growth rate for Ghana saw a lot of negative fluctuations prior to 1983 after which the growth rate remains positive and relatively stable with the highest growth rate in *–+2011. Obviously, this makes sense since Ghana experienced the infamous drought that lowered the lake Volta with its concomitant effects on productivity. This was the era of the popular “Rawlings necklaces” – the protruding collar bones from malnourished bodies.

As suggested by its name, the debt to GDP ratio is the Government debt as a percent of GDP in a specified period of time. Loosely speaking, a low debt to GDP ratio shows an economy that can produce goods and services sufficient to pay back its debt without incurring further debt. 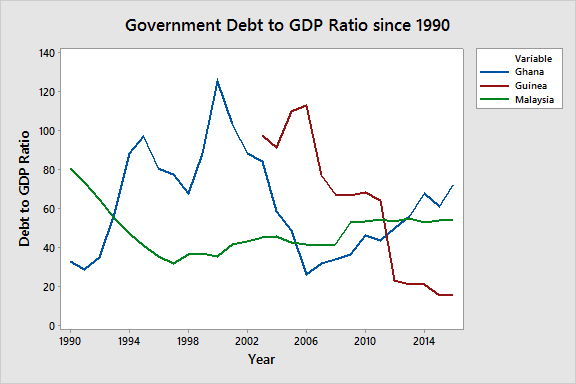 As shown from the graph, Ghana’s Debt to GDP ratio ranges from 26.2% (1993) to 125.4% (2000) with an average of 62% over a 15 year period. Although this average may seem unhealthy for some readers as it implies over half our country’s income is used in paying debt, it does not immediately follow that high debt to GDP ratios are crippling. In fact, it is well-known that some countries like the UK and Japan have maintained high debt to GDP ratios over long periods of time with minimal economic consequences. However, given that many investors use this to measure a country’s ability to pay its debt, it is crucial for the government of Ghana to keep this ratio as low as possible. Comparing Ghana to Malaysia, whose Debt to GDP ratio ranges from 32% (1997) to 81% (1990) and averaged 48% in 15-year period shows clearly that Ghana is relatively highly indebted. The case of Guinea looks even more interesting. In the early 2000’s, Guinea’s debt to GDP ratio was above 90%. However, in the past five years, their ratio has reduced significantly, reaching 20.8% in 2013. A useful rule of thumb is that a country should take on debt if the expected returns on investment is at least equal to the rate of interest. Having said this, we hasten to add that Ghana has plenty opportunities to mobilize local resources to produce more and reduce borrowing to a reasonable level.

Why are all these important for us to think about as individuals, businesses and the nation as a whole as we celebrate our Independence once again?

We live in a drastically different world than we inherited at our independence in the 1950s, probably making the need for economic growth more important than ever. Although there are immense advances in science and technology, new threats are constantly emerging – terrorism, global warming, new diseases, and financial crises. Ghana has made important strides. This in part culminated in her reclassification as a middle income country. As euphoric as this seemed to Ghanaians, little did some realize that this new status demands greater responsibility. For instance, it has recently been reported that one of Ghana’s longstanding development partners, the Danish International Development Agency (DANIDA), has withdrawn its development assistance to Ghana, starting with the health sector and phasing out others by 2020.

For better or for worse, Ghana must resolve to take her destiny into her own hands and spur the economic growth engine with new knowledge. One important area that concerns all – individuals, businesses, and governments – is the need to make informed data-driven decisions and policies. The future belongs to those who can generate revolutionary ideas that result from insights from data science.